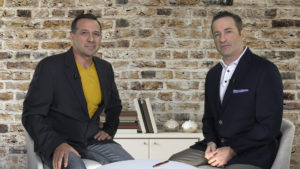 Ever wonder which home improvements bring the greatest return on your investment? Is a small basement remodel a better idea than an expensive and elaborate kitchen remodel? NFM Lending’s Chief Appraiser, John Liberatore, sat down with NFM’s Chief Business Development Officer and NFM Now Podcast host, Greg Sher, to discuss just that.

Hear some great tips on how to go about a home improvement so that you can get the greatest return should you ever sell your house.

John was an appraiser for over 20 years and gives his perspective on how an appraiser looks at the improvements you’ve made to your house, and how the market will see everything – from a $20,000 landscaping improvement to the replacement of a bathtub.

Listening on the go? Download the podcast of this interview on iTunes.

Here is a transcript of the interview:

Greg Sher: I’m Greg Sher, Chief Business Development Officer of NFM Lending, and I am delighted to bring a very important guest to the table. For anyone that owns a home out there, it’s our own internal AMC Chief Appraiser, the guy that’s running the show for us here at NFM, John Liberatore. John, thank you so much for being with us.

John Liberatore: Thank you for having me.

Greg Sher: Yeah, I’m delighted to have you, and as a homeowner myself, this is such an important conversation, because there are so many things out there that people say about … “Hey, you’ve got to do this home improvement. You’ve got to do that home improvement. This is going to carry value. That’s going to carry value. Don’t bother wasting your time on that.” I’ll first just say you’ve been doing this for 20 years. You’ve been an appraiser, so you’ve seen the ups and downs, and you know as well as anyone what the market bears for improvements. Is that fair to say?

Greg Sher: All right. Let’s first talk about some of the big misnomers. What are some things that people think that … “Hey, if I put all this money into that, it’s going to translate into a greater property value,” and they’re wrong? What are some of those things?

The other thing is landscaping. Now, it’s important to have landscaping so that you have curb appeal for a property.

John Liberatore: However, when you over improve that landscaping, the market doesn’t necessarily see it that way. They don’t interpret it as $20 thousand worth of landscaping.

Greg Sher: Got it.

John Liberatore: Not necessarily what it cost.

Greg Sher: Finished basement … so let’s just wrap that conversation up for a minute. An unfinished basement … and you go ahead, you finish it in a simple manner. Is that the biggest impact you can get on a basement? You said no crown molding. Don’t do too much down there. But is it such a big difference between finished and unfinished that it’s something you may want to address?

John Liberatore: That’s something. If you do the basics, that’s probably where you’re going to get the most bang for your buck. Once you start adding on to those finishes in the basement, you may be … you won’t be getting as much return as your investment.

Greg Sher: Got it. All right. Let’s talk about some things that increase the value of your home. What are the top three items, things that people can feel pretty good that they’re going to get a nice return on their investment?

John Liberatore: Kitchens, bathrooms. If you’re looking to resell your property, then you’re talking about paint, flooring, that type of thing. That’s where you can get the most bang for your buck. But again, when it comes to kitchens and bathrooms, you want to make sure you’re not doing over improvements. You’re not paying $50 thousand for a kitchen remodel.

John Liberatore: That’s only going to yield a $30 thousand increase in value. It’s something to consider when you think about doing these things.

Greg Sher: Yeah, and it’s like bathrooms. Like, people don’t think about these things. Not a lot of people, anyway, I think. If you have a bathtub currently in a bathroom, and you’re thinking about doing a remodel, should you take the bathtub out? It would seem to me that if you take the bathtub out and someone’s moving in that has young kids, they’re going to have a need for a bathtub. Is something like that little nuance … is that something to think about, or not really?

John Liberatore: That may be a positive thing. If you’re living in the part of town that has a popular school district and you’re getting a lot of people interested in moving there because of the schools, which means they have children-

John Liberatore: Obviously, and so in that particular scenario, you’d want to keep the bathtub in that house. It really depends on what the market is doing.

Greg Sher: What about additions? Sometimes, you see people that take that outdoor patio, they enclose it or turn it into another part of the house. Could that-

Greg Sher: Is that something they should be doing?

John Liberatore: They add value. If you’re going to take an outdoor patio or an outdoor deck or porch and make it part of the living area, my recommendation would be to not just finish it, but also heat it, especially if it’s above grade.

John Liberatore: Because when it’s finished, heated, and above grade, all of the sudden, it becomes part of the GLA, the gross living area, which has a big impact on the value of a property in that particular community. If you’re going to take a porch and you’re going to finish it and it is above grade, it might make more sense to spend a few thousand more to have it heated.

Greg Sher: Wow. Great tidbits from our Chief Appraiser at NFM, John Liberatore. I hope you found it beneficial. John, thank you so much. We’re so happy to have you at NFM.

John Liberatore: Thank you. It’s a pleasure to be here.

Greg Sher: All right. Until next time, have a great day.

The post Home Improvements – Best Bang For Your Buck appeared first on nfmmedia.net.